The capital of East Flanders is a beloved Belgian city among students. The progressive city combines modernism with its wonderful history and transforms the cobblestone paths and quaint little houses into a popular attraction for both locals and tourists. Ghent is charming in every season, but especially in the month of July the city comes to life. It is then that the great 'Gentse feesten' are organized every year. A grand, ten-day festival that is spread out over the whole city during day and night.
The beautiful accent that the people from Ghent have, the amazing buildings, the rich history, the delicious food, the cool bars and clubs, ... Yes, the East Flemish capital is easy to fall in love with!

Canal tours along the Gravensteen, a gigantic fort in the middle of the city.

Stay – Finding a cheap hotel in Ghent is quite difficult… The most visited tourist attraction of East Flanders isn’t exactly cheap. For a youth hostel you’ll easily pay €30 to €40 per person. For a budget hotel for two people you should count on approximately €65. Three stars begins at €80 per night. Most four or five star hotels give you a prime location in the city and cost about €130 to €185.

Eat – Eating out in Ghent can be done in different price ranges. If you don’t want to spend too much, but want to eat well, I recommend buying a sandwich with toppings. You pay three euros or a bit more for these. For a portion of fries with mayo or ketchup you pay €4 to €5.
Eating out is possible from about €15 per person. Much depends also on where you are. The tourist hotspots will of course ask more.

Transport – I don’t take public transport in Ghent very often, because everything is located very close to each other. Yet you can take the public transportation to see certain attractions. A single ticket for a bus or tram costs €3 for a paper ticket or €1.8 for a text message. The same price (€1.8) is also used for a ticket that you buy through the app. Another possibility is to buy a card with 10 rides on it for €15. Each time you’re taking public transport, you need to scan it in one of the devices on board of the tram or bus.
From the Sint-Pietersstation (central train station) you have excellent train connections to other cities and villages in Belgium. You need to buy your tickets at the vending machines in the station, directly from the ticket booths or you can buy it online on B-rail.be.

The ‘Vrijdagmarkt’ in Ghent. One of the many squares that you can find in the city.

Leave the car at home – Public transport to and in Ghent is excellent and besides, it’s not that expensive. Coming here with the car brings many annoyances. Moreover, since 2017 it has been prohibited to drive through the city center (unless you have a permit), but parking spaces are also very scarce. If you do find one, your wallet will quickly be emptied. €10 for three hours is a bit much if you ask me… When you’re coming to Ghent at night, you can park your car in one of the underground garages. From 7 pm until 9 AM you only pay €4.

Walk – Once you’ve arrived in the city center of Ghent, everything is located very central. Taking a tram or bus is rarely necessary! Everything is within walking distance of each other.

Free things to do in Ghent – Do you like cultural happenings such as vernissages, lectures, performances or festivals? Then be sure to check out ‘Free in Ghent‘. Here you’ll find a clear overview of all free activities in the East Flemish city.

Eat cheap – A half baguette with toppings and vegetables will only cost you three euros or maybe a bit more. It’s tasty, healthy and very cheap. Would you prefer something warm? Choose a panini go for a delicious portion of fries in one of the many ‘frituren’.

The Korenmarkt in Ghent is seen as the most central square of the city.

Things to do in Ghent

Gentse feesten (‘Ghent celebrations’) – I myself make sure that I’m home every year in July to go to the Ghent celebrations or ‘De Gentse Feesten’. This gigantic city festival turns the city center of Ghent into the coolest city in the world for ten days! During the day there are all sorts of activities, such as theater, dance and singing performances but also nice markets and yummy food stalls can be found everywhere. In the evening and at night, the biggest crowds arrive because then the entire city becomes one big party place. Every market has a stage with musicians or DJs that keep the many party animals busy until the early hours! Around 9 AM each morning, the remaining party people (and trust me: there are still loads!) end the ‘Gentse Feesten’ on the ‘Vlasmarkt’. Ten days long!

Graslei and Korenlei – The most beautiful places to walk in Ghent, are in my opinion the Graslei and the Korenlei. These car-free paths take you along the river that gently meanders through Ghent. In the meantime you see some beautiful buildings and you can enjoy the passing boats and ducks. On days with good weather it’s wonderful to sit here and so some people watching.

The Castle of the Counts (‘Gravensteen’) – The only medieval fortress that has remained intact in Flanders can be found in this city. The beautiful structure is almost in perfect condition and is seen daily by thousands of visitors. Climb the fort and be amazed by the history that took place here. Moreover, you also get a beautiful view of the city from up here.

Churches and cathedrals – Every square in Ghent has at least one religious building. The beautiful churches and cathedrals all look amazing from the outside, but inside they are often even more impressive! Some of them even have world famous art collections in them. Be sure to look at the Belfry, St. Nicholas’ Church and St. Peter’s Abbey.

Korenmarkt – The Korenmarkt is the central square of this city. Along the cobblestone streets you’ll find many nice shops, and often the square is also occupied by markets, fairs or some other festival.

Museums – Ghent has many museums! There is something for everyone. Take a look at the website of the city of Ghent to get inspiration for your next museum visit.

Shopping – Many shopping streets can be found throughout the East Flemish city. The largest of them all is the Veldstraat. Here you’ll find mainly the bigger (chains) stores, but a little further you’ll find a lot of nice boutiques as well. The shopping center ‘Het Zuid’ is another mecca for shopaholics.

The ‘Graslei’. Nice restaurants, or the perfect spot for reading a book next to the water.

Things to avoid in Ghent

Walking in the middle of the street – Many streets are car-free in Ghent. Yet this doesn’t mean that there is no danger at all. Trams, taxis and cyclists still roam the streets and they can also be dangerous! Since 2017, the historic city center of Ghent has been made completely traffic free, with the exception of taxis, trams and local residents. You can find more about this here.

Coming to Ghent with a car – It’s expensive, you lose a lot of time and it’s a guaranty that you’ll get annoyed by it. Leave your car at home and travel by public transport instead. It’s faster and you’re in the center in no time!

Booking too late – Hotels or accommodations in this city are quickly sold out. The cheaper spots are often fully booked weeks in advance. If you go to Gent it’s not a bad idea to already plan your accommodation in advance.

The city center of Ghent is car-free for the largest part! 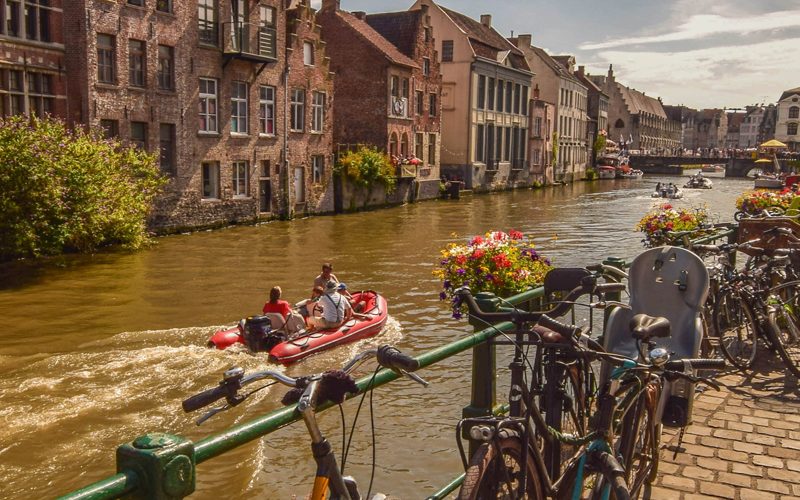 In recent weeks, Belgium has been plagued by rain, storms and all kinds of terrible weather perils. It seemed as if the weather Gods had finally improved their mood! The last ten days were hot and sticky; undoubtedly the best weather we ever had during the Ghentse feesten! On July 14, 2016 I arrived at my dear niece, Lisa, who would …